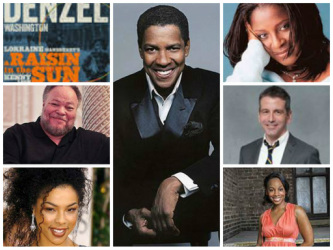 The Barrymore Theater presents A Raisin in the Sun starring Denzel Washington, Diahann Carroll, Anika Noni Rose, and more. An American classic, A Raisin in the Sun takes place in the late ‘50s in a south side Chicago apartment, chronicling the lives of the members of an African-American family. Matriarch Lena plans to buy a home in an all-white neighborhood when she receives a hefty insurance check. Her son Walter dreams of buying a liquor store and being his own man, and her daughter Beneatha dreams of attending medical school. The tensions and prejudice they face create the drama in this beloved play.

All of our tickets are SOLD OUT!
All payments are non-refundable.

Please note there has been a change in casting.
Veteran actress Diahann Carroll.  LaTanya Richardson Jackson, who is Samuel L. Jackson’s wife, is presently slated to replace Carroll in the role of Lena Younger. Denzel Washington will portray the son of Lena Younger, now replaced by Jackson.
Powered by